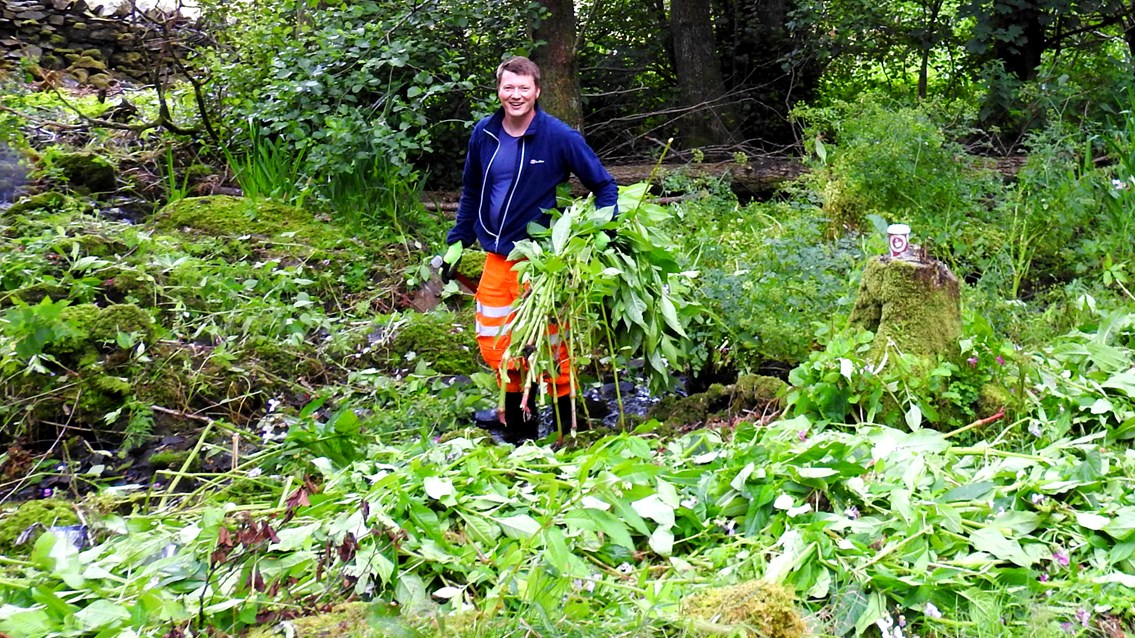 Volunteers from Network Rail are helping to stop destruction on a river in Cumbria by Himalayan balsam – one of Britain’s most invasive alien plant species.

The non-native weed, which has a stronghold on local rail embankments, risked infesting a beauty spot in Troutbeck and on the River Kent in Kendal before the volunteer railway workers joined forces with the South Cumbria Rivers Trust (SCRT).

Growing rapidly, the Himalayan balsam was spilling from the railway onto the riverbank, suppressing native plant growth and threatening the recently created natural flood defences.

SCRT built the natural defences by stacking logs and building dams to reduce flooding risk. To monitor the project’s success, CCTV was installed. The infestation of Himalayan balsam meant the view of the CCTV was obscured.

Matthew Thomas, an ecologist at Network Rail who took part, said: “Usually the South Cumbria Rivers Trust has to call in specialist contractors to do all their Himalayan balsam clearance, so we were happy to use our volunteer leave to lend our graft and knowledge, and help reduce these costs.

“This invasive plant is a huge blight on the railway and native biodiversity in general so anything we can do to share best practice and slow the spread in areas of natural beauty like the River Kent and Troutbeck is the least we can do.”

Riverbanks, railways and waste land are the perfect breeding ground for Himalayan balsam to spread rapidly.

It greedily gets an early start in spring and quickly shades out native plants so that by summer it has often taken control of the entire habitat.

Each plant has pods containing more than 500 seeds each which then explode in the autumn, allowing new plants to set root up to seven metres away.

Jayne Wilkinson from the South Cumbria River Trust, said: “As a small charity we work closely with partners and volunteers to deliver benefits across South Cumbria, therefore we were grateful when Network Rail got in touch saying they would like to help out on a volunteering day.

“We had the perfect site for them alongside a section of railway line in Kendal where Himalayan Balsam has spread rapidly, with the team doing a good job of ‘pulling’ the balsam on the day to clear neighbouring land. Although still an issue at the site, with on-going control required, it is good to see some progress being made to help to protect our local biodiversity.”

Thanks to the SCRT and the work of the volunteers, Himalayan balsam has been almost eradicated from the River Kent.

This involved what’s known as ‘balsam bashing’ – pulling up the invasive weed before its seed pods are big enough to burst.