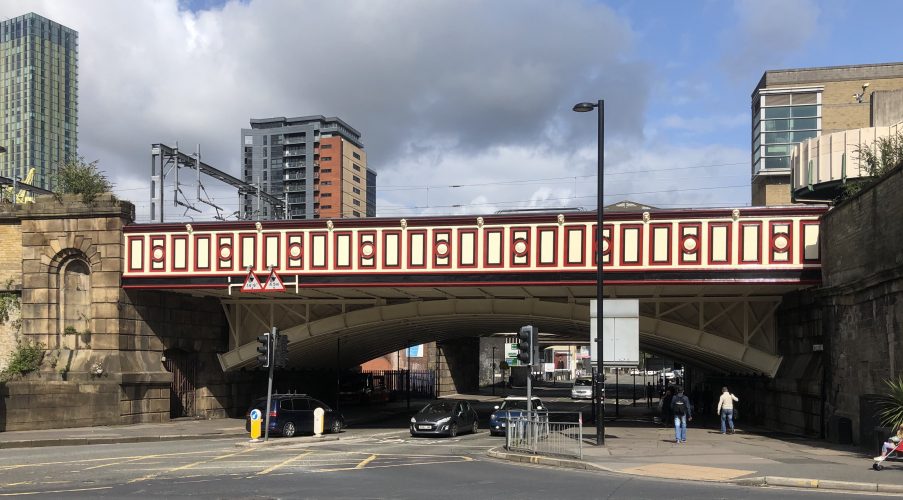 We’re proud to have won five prizes at this year’s National Railway Heritage Awards as we continue to fund and support work to protect railway heritage for communities across Britain.

Network Rail is the custodian of a railway that dates to Victorian times, with striking and historically important bridges, stations and buildings all over the country.

We’re grateful for the recognition at the NRHA held online on 2 December, presented by Andrew Haines, chief executive of Network Rail.

The NRHA has awarded prizes in recognition of restoration and the re-use of parts of railway-built heritage since 1979.

It’s the only awards body dedicated to rewarding and encouraging best practice in the restoration and maintenance of our Britain’s railway heritage.

People and the railway: The Railway Heritage Trust

The restoration of three railway bridges in Manchester is one of our most high-profile heritage achievements in the past year.

We returned the bridges to their Victorian splendour as part of the Great North Rail Project to improve railway travel in the North of England.

We unveiled a plaque in Great Ducie Street in Manchester in October last year to commemorate the £3.2m work by Network Rail, in partnership with the Railway Heritage Trust.

Gallery: the Great Ducie Street before and after restoration

The building originally opened in 1847 and was designed by local architect Benjamin Green who was also responsible for numerous civic and public buildings, including many railway stations on the East Coast Main Line.

The Architecture the Railways Built – The Ffestiniog Railway

Euston Station’s surprise visitors, the Duke and Duchess of Cambridge