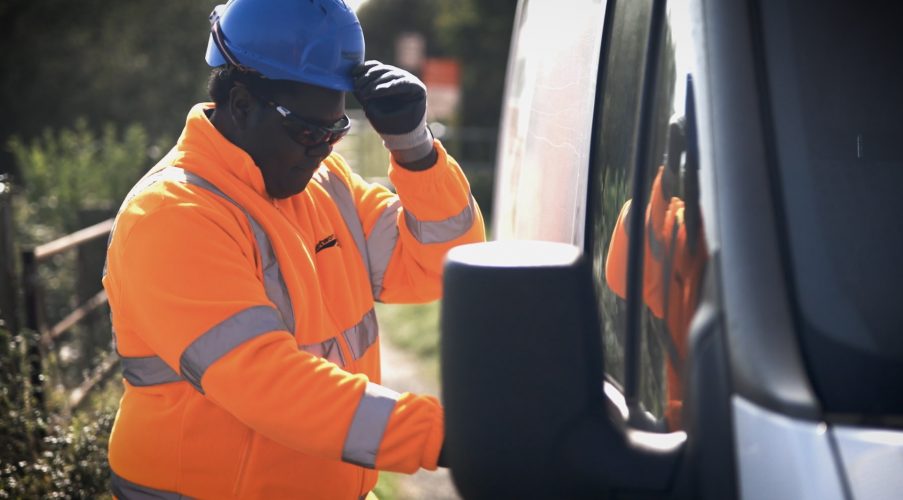 Growing up, Nathaniel Legall looked up to Attenborough and his science teacher – but didn’t know he, too, could make a career out of his love for the outdoors. Today, he’s one of our many ecologists.

We talk to Nathaniel about where to look for careers helping the environment and biodiversity and why it’s important young people know about the wide range of fantastic jobs available.

Watch Nathaniel in this video:

“Making a difference is probably one of the reasons I became an ecologist.”

Watch Nathaniel and colleagues in our new film, Change the Game

I am an ecologist. My job involves assessing sites for their biodiversity value across the railway, particularly on the lineside, where there are fantastic areas for habitats, which different animals and plans can exist, and basically mitigate the impacts of our works on them and to make sure they have somewhere to live and make sure the railway remains operational.

Do you enjoy your job?

It’s absolutely fantastic. I’m surprised I didn’t know the job existed until probably the first year of my degree but before that, I’d always loved being outside, loved the outdoors, got involved with whatever activities I could get involved with, whether it was the Scouts, the Army Cadets and different summer clubs, and always had that affinity to the outdoors.

But I didn’t know you could actually make a career of it, probably until later on in life, which is fortunate because I can do it every day and love what I do.

Nathaniel spends much of his time outside when he’s working

When I was a kid, I didn’t know that ecologists even existed. I thought the likes of David Attenborough and people on TV, that was just wildlife TV makers. I didn’t know you could actually make a career out of assessing and recording wildlife. I wish I’d known that sooner so I could have started practicing the techniques and skills you needed to be an ecologist.

Making a difference is probably one of the reasons I became an ecologist because it presents an opportunity to have a lasting effect on the environment and the habitats that exist within our country so this role offers not only the opportunity to visit some fantastically beautiful places but also make a positive long-term difference to the animals and plants that exist there.

What did you study?

I did an undergraduate degree in bioscience and then moved on to work for a local wildlife trust, which is a charity that focuses on biodiversity within a local area. And then went on to do a master’s degree in biodiversity and evolution and conservation. That led to me getting different experiences that helped me gain a better understanding of biodiversity in the UK and how we can improve it. So now I can apply those experiences and skills to work for Network Rail.

I felt like there was a good opportunity to move to a … company that might have a more wide-reaching impact on the environment. I saw my skills were valuable within Network Rail so I started pursuing Network Rail as a potential employer and saw opportunities coming up on the Western Route, which is where I was most familiar with.

Why does the railway have biodiversity jobs?

The lineside is very green, it’s very natural and you need people who understand what lives there to help mitigate against impacts on them. It’s fantastic that those opportunities exist.

What did you want to be when you were younger?

I was studying to become a doctor at one point but that didn’t really fit in with my idea of being in the outdoors, except for being an emergency doctor on field trips or expeditions. That was probably the only other potential career but I felt like I was selling myself short. Being outdoors and protecting the environment is something I’m truly passionate about and it’s something I’ve been able to pursue in my career and something I enjoy doing today.

Is the railway exciting?

The railway is an exciting place to work because of the people involved with it. Not only are there project managers and engineers and track teams managing this fantastic infrastructure that connects the whole of our country, you’ve also got ecologists and environmental managers and a whole plethora of science and engineering-focused people.

It’s important to imagine the railway is this massive system that requires loads of people to maintain it and keep it safe for passengers. There are plenty of opportunities for young people with a science and technology background to get involved.

Did you have a role model when you were growing up?

My mentor, the person I looked most to, was my science teacher in secondary school. He was Black as well … I think he saw himself in me quite a bit so he took me under his wing and I loved science as well at the time.

It’s important that young people can see it’s possible that when you’re doing your A Levels or doing your GCSEs and you’re interest in sciences that healthcare careers aren’t the only ones available. There are so many other things you can do that provide just as much of a fulfilling career.

Where do you see yourself in 10 years?

In 10 years’ time, I’d like to be taking part in research-level projects within the railway and do more of encouraging more of a research focus within our environmental activities.

What do you hope to achieve by the end of your career?

To have taken part in projects that have led to an increase in biodiversity on the railway and potentially even outside the railway. For me, that’s important to leave a positive lasting legacy that can then be enjoyed by future generations.

Q and A with Michelle Chrabalowski, environment specialist

Working with the environment

The post Change the Game – Q and A with ecologist Nathaniel Legall appeared first on Network Rail.